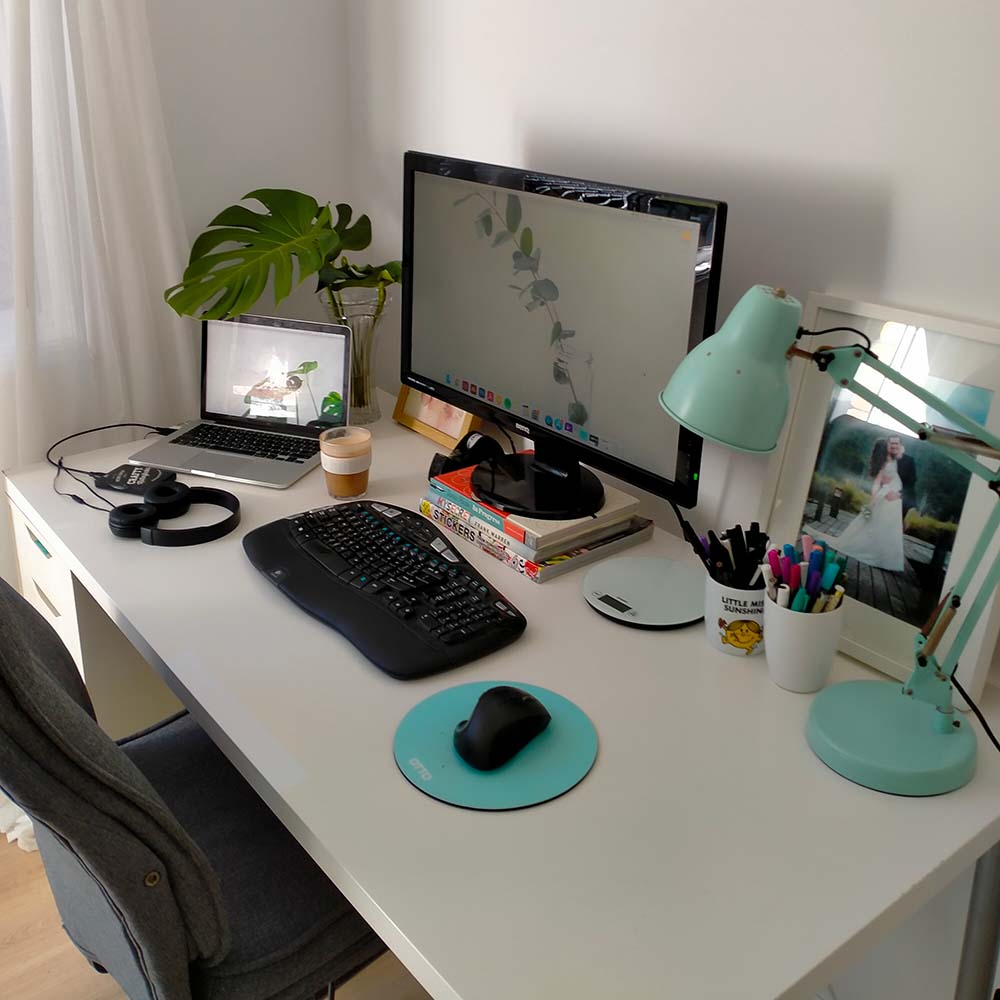 This is my current computer setup. If you’ve got a keen eye you’ll notice that I’m using a MacBook with PC peripherals, which I know doesn’t make much sense but I’ll try to explain it below! I’ve fine-tuned my set-up after many years of experimentation and this is what is currently working for me. It’s not usually this neat and tidy, but I do try to keep it pretty clean because it helps me to focus.

When it comes to tech I’m all about function. As much as I love pretty things, when it comes to my workspace, my main focus is on what will maximise my productivity.

Macs are considered the industry standard in the design industry, but there’s also plenty of PC-based agencies and designers. I prefer to use a Mac because I like the Mac operating system and I prefer the way that the Adobe software works on Macs. I’m otherwise generally not a fan of Apple products. I used to be firmly team PC, and I was horrified when I started design school and realised that I was going to have to learn graphic design on a Mac! But once I got the hang of the operating system I was a convert. I’ve tried running the operating system on a PC but it doesn’t work the same. So now I have a MacBook but I use PC peripherals and have an android mobile!

I try to be very intentional about my tech consumption. I have a laptop that i plug in to a desktop monitor, rather than having seperate laptop and desktop computers. This saves me having to invest in two seperate computers but it also makes in really easy to switch from my office to another room without it disrupting my workflow. I try to avoid replacing my tech as much as I can. The Adobe software requires a pretty fast computer to work effectively, but that doesn’t mean you have to constantly upgrade. My current Mac is a 2015 model and is still going strong. Last year I started to find that the hard drive didn’t have enough space, but after some research I discovered that I was able to upgrade the hard drive for under $300 (much cheaper and better for the environment than buying a whole new computer!). My desktop monitor is about 10 years old now but I’m still really happy with it so I have no plans to replace it until it stops working.

I generally do all of my design work at my desk, as I find I can do design work significantly faster when I’m using the mouse and the bigger screen than when I’m working on my laptop. But I also love the flexibility of being about to work on my laptop when I’m doing other things and I want a change of scenery. I wouldn’t want to have to choose between a desktop or a laptop, so I love that my current setup enables me to have both!

I’ve very, very particular about my mouse. I tried out many different options before settling on the Logitech Darkfield Mouse. It’s a gaming mouse, but the features that make mice good for gaming also make them really good for graphic design. My mouse is about 8 years old now and there’s a new version which is supposed to be more precise, but they’ve changed the scroll wheel and now it’s all wrong. I’m dreading the day my mouse finally dies and I have to buy something else. When I’m finally forced to upgrade I’m probably going to switch to the Logitech MX Vertical Mouse.

I have two external hard drives that I use for backups and storage, and I also back up my work on Dropbox. External hard drives are one of the few things that I replace regularly rather than waiting for them to break because it’s really important that I have a reliable way to backup and archive all of my client work.

I don’t use an iPad, tablet or drawing tablet. I’ve tried out a few different ones but they’re just not for me.  For illustrations I draw with my mouse and the Pen tool in illustrator, or I draw onto paper and then scan it into my computer and vectorise it in illustrator (which is probably considered very old fashioned these days but it’s the way I was taught at design school and it’s what I prefer!)

I’m currently on the hunt for an aqua or sand coloured oversized mouse pad, but I haven’t found anything I’m happy with yet. I’m very fussy about my mouse pad as it has to be just the right texture so that it doesn’t compromise the performance of the mouse. It might take me a while to find exactly what I’m looking for!

As far as software goes, I have a subscription to Adobe Creative Cloud. The vast majority of my layout work is done in Adobe InDesign. I use Adobe illustrator for illustrators and some packaging design, and I use Adobe Photoshop for image editing and mocking up product images.

Here’s a breakdown of my current computer setup:

Hi I'm Felicity! I'm a freelance graphic designer based on the beautiful Sunshine Coast, Australia. I've been a graphic designer for the past 11 years, and I've been running Flik Graphic Design since 2013. On my blog you'll find my thoughts about business, design and printing.